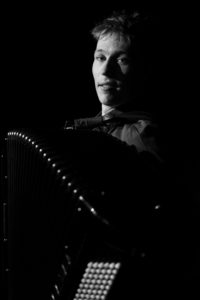 As long as he can remember Wilco has arranged and composed music as an extension of his musicality. From Folk to jazz, for theatre to classical music or often a combination, he has been asked to arrange in and for a variety of settings.

One of his achievements is Bartoks Sonate for two pianos and percussion which he arranged for an accordion, a bayan and percussion, he premiered this on his final exam in 2019 as well as his piece “naar Carter” for solo accordion.

In 2020 he made 3 balkan inspired compositions for windband. Gecko cocek, pusta and Graovsko.
Throughout his musical life, Wilco has played in bands of very versatile settings. As such, he has often had to change the arrangements in order to suit the musicians available at the last moment. Some of the key points of his works are described as being: “Modern and playful”