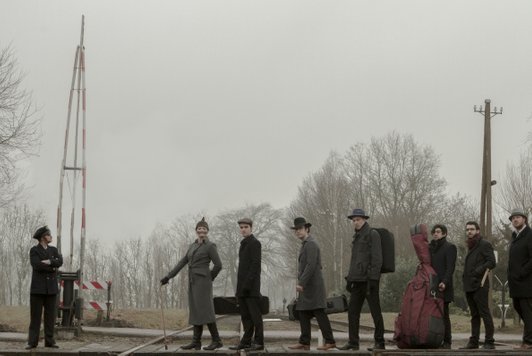 In the late summer of 2018 I had the chance to perform the opera de grens (the border) from JP de graaff. A 45-minute opera written for my ensemble but what about.

This 2-year project came to an end with a nice tour in the south of the Netherlands.

Apart from the nice show and the performances, the best thing was the cast and crew, we had a lot of fun putting the show together and had a really good time in and around rehearsals and shows!

The year is 1918: The Great War is nearing its end. The German emperor, Kaiser Wilhelm II, arrives at the Dutch border in exile, seeking asylum in the Netherlands. However, the Dutch government was not notified in advance of the Kaiser’s arrival and takes its time to decide whether the royal visitor is welcome or not.

Pending the government’s decision, the Kaiser (mezzo-soprano Eva Kroon) is stuck at the railway station of Eijsden, a small town at the southern border of the Netherlands. There, he meets the station manager (soprano Ginette Puylaert), a man whose character, lineage and political views are in complete dissonance with that of Kaiser Wilhelm. The two gentlemen have a fiery discussion, but despite all the differences they have one thing in common: a total lack of control over their own situation.

more on the grens on:
http://butwhatabout.nl/projects/de%20grens.html